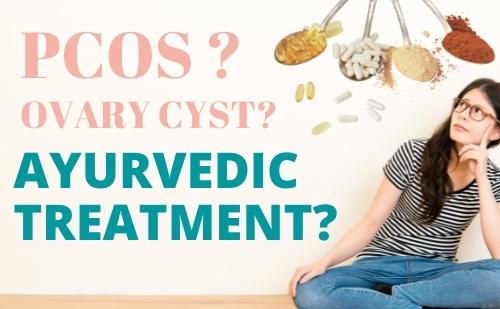 Know About Ovary Cyst, PCOS and Their Ayurvedic Treatment

Most of the women have an Ovary cyst some time in their life. Chances are that you suffer from an Ovarian cyst every month. It is mainly due to hormonal imbalance. The ovaries grow a cyst-like structure known as follicles every month during ovulation. The follicles produce hormones namely estrogen and progesterone. The follicles rupture during the ovulation period and release an egg from the ovary into the fallopian tube. However, sometimes a follicle does not release an egg during ovulation. And instead, it continues to grow to form functional cysts. These cysts are usually harmless and often disappear on their own within two or three menstrual cycles.

However, if symptoms persist, it becomes a matter of concern. That is why we, at Innovia Drugs have prepared a detailed guide about an Ovarian cyst and its Ayurvedic treatment. First of all, let us shed some light on the symptoms of an Ovary cyst.

Symptoms of an Ovary Cyst

In many cases, you won’t be able to notice any symptoms of an ovarian cyst. On the off chance, if you have a larger ovary cyst, you might observe certain symptoms. As per the studies, following are symptoms that you can come across during an ovarian cyst:

So, if you are experiencing any of the aforementioned issues, then you might have developed an Ovarian cyst. It would be better to look for an Ayurvedic treatment for the cyst. Now, let’s dig deeper to know about the Ayurvedic approach to heal an ovarian cyst.

According to certain studies, Polycystic ovaries are also non-functional cysts generally known as PCOS. However, they can’t be completely regarded as cysts. Small cysts are developed on your ovary during PCOS. They are generally non-painful and can result in hormonal imbalance. However, they can be harmful if not given attention.

When it comes to Ayurveda, it categorizes an ovarian cyst under Kaphaj granthi-granthi arthva dosha. This dosha can contaminate mamsa (muscles) of your body resulting in pain. Thanks to Ayurvedic remedy that works on the principle of healing the whole body.

Ocyrid tablets/syrup an Ayurvedic remedy by Innovia Drugs is one such medication that is used to treat Ovarian cyst and most commonly PCOS. Innovia Drugs believes in providing the people with a healthy lifestyle via Ayurveda. Ocyrid consists of ingredients like Kachnar Gulgulu, Bhumi amla, Sobhanjan, Devdaru, etc.

Kachnar Gulgulu helps in reducing swelling and eliminate lumps. Bhumi amla helps in healing ulcers and manage liver disorders whereas Devdaru helps in reducing obesity. All in all, Ocyrid by Innovia drugs is a perfect ailment to heal PCOS and cysts.

Ovary cyst has become quite common now a days. But, they can be treated if provided with proper remedy. Let’s hope that you’ll be able to get rid of your Ovarian cyst and live a healthy and happy life by using OCYRID TAB AND SYRUP an Ayurvedic product by Innovia Drugs.